Click here to learn more on what can be done during the COVID-19 Lockdown in New York City.

There are many reasons couples tend to shy away from prenuptial agreements in New York, but they can serve many legitimate purposes other than implantation of doubt and thoughts of an impending divorce. Marriage is romantic. It is an expression of love and lifelong commitment. Is it appropriate to reduce it to a written contract?

A request to enter into a prenuptial agreement with the help of an experienced prenuptial agreement lawyer in NYC is not to be interpreted as an expectation of a divorce in the future; but rather as an opportunity for two well-meaning individuals to make reasonable accommodation for each other at a time each has only positive feelings for the other.

In general, prenuptial agreements are waivers of rights; limitation on expectations made in recognition that if and when “things” go bad, people tend to behave badly. With these agreements, the parties indicate the attempt to amicably resolve now what conflict, anger, and disappointment may conflagrate into a potentially ugly legal battle in court, in the event of an eventual separation or divorce.

Under present New York State Law, upon marriage, anything of value thereafter acquired by either party presumptively belongs to both parties in substantially equal amounts. However, if “items” of “value” are the property of either spouse prior to the marriage such items remain “with exceptions” the separate property of that party. Thus, it is essential to identify assets possessed at the time of the marriage and to understand how and by what means that property may be protected in the event of the dissolution of the marriage. Only after each party has made full and complete disclosure of all pre-marriage assets and debts can the necessity for a prenuptial agreement be determined and appropriate limitations be discussed.

What is A Prenuptial Agreement? 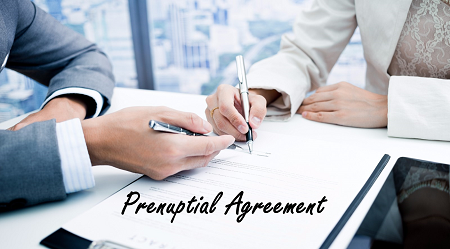 A prenuptial agreement or premarital agreement is a contract by which parties agree to various financial/property terms in the event the marriage should terminate. The discussions pertaining to the document will cover the identification and allocation of assets and spousal maintenance in the event of the divorce.

The content of a prenuptial agreement may cover such concerns as identification of what is marital and what is separate property; what is to happen if marriage is to be terminated; and what is to occur in the event of the death of one spouse.

A properly drafted prenuptial agreement outlines the duties and responsibilities of each party in the event of a future divorce. Except in exceptional circumstances, New York State recognizes the validity of these agreements. It is also important to note that child-related issues (custody and support) are cannot be included in a prenup agreement.

The basic requirements for getting a valid prenuptial agreement in New York include:

If you need assistance drafting and negotiating a prenuptial agreement, contact our Manhattan office today to arrange a meeting with a top-rated prenup lawyer in New York City. Paul E. Rudder, Esq. can answer all your questions about prenuptial and postnuptial agreements in New York. Call (212) 826-9900 now to schedule an appointment.

What Are The Benefits of A Prenuptial Agreement?

A prenuptial agreement can benefit couples, preparing them for marriage and provide them with long term protection by:

Who Should Get A Prenuptial Agreement in New York City?

Despite the common misconception, prenuptial agreements in NYC are not just for the rich or famous individuals. Any couple entering into a marriage has assets they may want to protect, and a prenuptial agreement is often the best way to accomplish this.

In some cases, a parent may wish to protect their children’s inheritance in the event of divorce. Not infrequently a party may want to keep ownership of a home as separate property as it may have been in that party’s family for years or purchased by; that party prior to the marriage. The basic premise, however, is that prenuptial agreement can/will control the future to a degree different from what a court may impose after a trial.

The bottom line is prenuptial agreements enable couples to control their future.

When Is a Prenuptial Agreement A Good Idea?

Drafting a prenuptial agreement is always a good idea. If you have any assets you want to protect, you should consider hiring a prenup attorney to help you properly draft the agreement. Anyone entering into a marriage can have separate property.

Here are some common reasons why people choose to enter into a prenup:

Monetary issues often negatively impact marital relationships. Discussing each parties’ individual assets and debts in advance of the marriage can often prevent or minimize future financial disputes. In fact, in many cases, marriages that have prenuptial in place are more secure than ones that do not.

Prenuptial agreements are becoming more and more popular in New York for many different reasons. One reason is that many people are getting married later in life, which means they likely have more assets (or debts) prior to entering into marriage.  Another reason is that more people are entering into a new marriage with children from prior relationships. In both of these instances, and in many other situations a prenuptial agreement allows the couple to negotiate commonly tricky situations before entering into marriage.

Q: Should I Consider a Prenuptial Agreement?

A: Yes.  You should consider a prenuptial agreement if you have a high net worth or high future earnings potential. Prenuptial agreements are also ideal for those with blended families, those who have assets they want to keep separate, and those wishing to eliminate future support obligations.

Q: Is a Prenup Lawyer Necessary for a Prenuptial Agreement?

A: Anyone looking to get a prenuptial agreement must have an opportunity to consult with a legal counsel. They must have also the opportunity to receive a full and fair disclosure of the estate of the other party. Either party can elect to waive these requirements, however this is not recommended. A prenuptial attorney will help you ensure you are receiving a fair deal that protects your rights and your assets in the event of a divorce.

Q: Can We Modify Our Prenuptial Agreement After We Are Married?

A: Yes. Generally, you can alter or modify any terms of the prenuptial agreement. The changes must be in writing and signed by both parties. All of the other terms of the agreement will remain intact, unless you revoke the entire agreement in writing.

Q: Are Prenuptial Agreements for the Rich?

A: No! One reason people may want an agreement is to decide in advance how assets accumulated during the marriage will be handled in the event of divorce or when the first spouse dies. Another reason might be to reassure one another that neither spouse will seek alimony or to agree that the parties will use mediation in the event of marital dissolution. Deciding these matters in advance, before a breakdown in the relationship, can significantly reduce legal fees for divorce and often lowers the chances of the couple divorcing in the long run.

Q: What Happens to Our Assets & Property if We Don’t Have a Prenuptial Agreement and We Get Divorced?

A: Without a prenuptial agreement, your marital property is divided by the court in a way that is fair. In order to determine what is fair, the court looks at a number of different factors, such as each spouse’s age, income, and health. Additionally, property that was owned prior to the marriage, or that was received as a gift or inheritance during the marriage, will generally be given to that person.

What Is A Post-Nuptial Agreement And Why You Need One?

When Is It Too Late For A Postnup?